Upcoming Cornerstone Re-Dedication Reflects the Past

On October 15, the Grand Lodge will re-dedicate the Rhode Island State House cornerstone in a public ceremony to be held on the steps of the State House.

The Grand Lodge of Rhode Island dedicated the cornerstone on October 15, 1896 and the upcoming ceremony will be very much in keeping with the original dedication. The sterling silver working tools used in the first dedication will be taken out of storage and used again. The ritual of trying the stone with the plumb, the level and the square is a familiar one. Careful measurements are taken to ensure the cornerstone is square and properly aligned, giving the builders a reference point from which to construct the building.

What about the consecration using corn, wine and oil? Their use is an important part of the ceremony, but why? In ancient times, cultures believed that the position of the heavenly bodies regulated life, fortune and success. Cornerstones were the first stone set in the construction of buildings and were mostly positioned facing the northeast. It was thought that this placement would bring harmony and prosperity to the building and its owners. Corn, wine and oil have been used in ceremonies and as a form of wealth from the earliest times.

As referenced in II Chronicles, “The children of Israel brought in abundance the first fruits of corn, wine and oil”. Nehemiah tells of “tithes of corn and wine and the oil into treasuries.” Note that corn in ancient times was not what we know as corn today; it was more of a grain. In King Solomon’s day, corn, wine and oil were used to pay the wages of the workers and is why we refer to them today as “Master’s Wages”. In the cornerstone laying ceremony corn, wine and oil are poured symbolizing health, prosperity and peace. The Masonic cornerstone dedication ceremony is a meaningful, beautiful expression of Freemasonry’s values.

Please plan to attend the re-dedication ceremony on October 15.

More Articles in Masons in our community 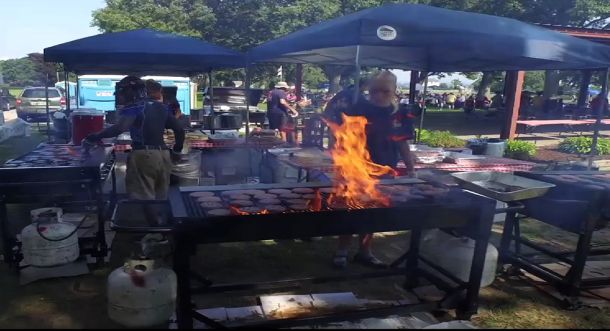 Summertime Fun by the Bay